Just another day in Kansas!

It was a beautiful sunny day today and I wanted to make sure and get the kids outside for our normal walk and backyard time. Today, the wind was so strong that I just had to take a few pictures of the effort the kids put in to playing! 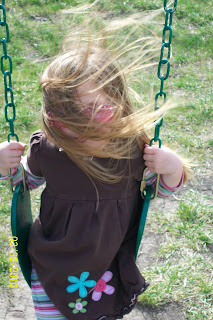 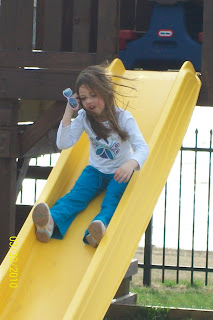 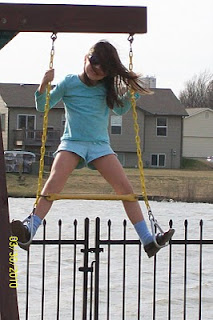 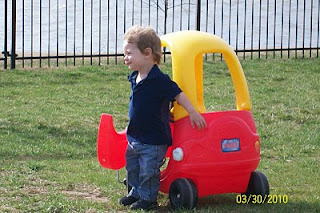 The wind was just crazy out there.  Sam LOVES his car.  But every time he tried to get in it, the wind would blow it away.  So he just cried and cried.  Finally I went over there and held it still for him until he could get in.  He was a much happier camper!  I'm glad the wind didn't stop us from getting outside! 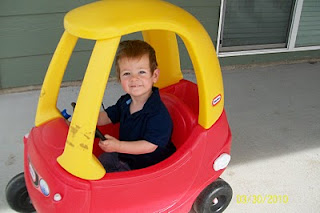 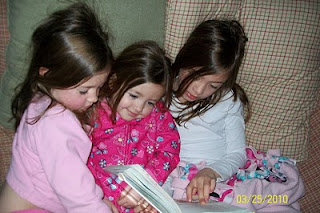 Being a mom means lots of little surprises during a day. Some days, I'm surprised at my capacity to tolerate noise. Some days it is shocking the number of times my phone can ring on the one day I decide to take a nap. Other days, I'm surprised by the things my children say. Isabella woke up the other morning and stumbled into my room and said, "Mommy, I'm grouchy, is it close enough to morning to get up?" I thought, good to know...better get back in bed and wake up a little less grouchy! I've been surprised by the amount of vomit one tiny child is capable of producing, and surprised at my creativity at handling diarrhea in the middle of Wal-mart with an empty diaper bag. Let's just say that wrapping a child's bottom in a spare t-shirt wasn't my first choice, but it worked. And I'd probably do it again if I had to. I'm surprised daily by my children's imaginations and their ability to role-play and create their own little worlds. Today, I was mostly surprised by how loving my children were to each other.

Sophia is not a morning person. I wake her up and she gets dressed, crawls to the couch and waits for her breakfast, eats, then crawls back to the couch a few more minutes before the bus comes. This morning, Isabella...who is as bright as the sunshine every morning....went to the couch and asked Sophia if she could snuggle with her. Sophia said sure. Aren't they cute? 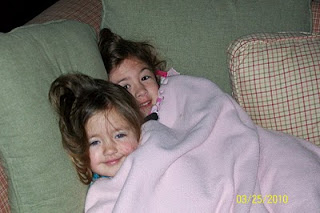 Then Anna woke up and Sophia snuggled on the couch with them and read them stories from our rhyming toddler's Bible. The girls LOVED it! Now that's a much better way to wake up in the morning!
For over a year Sophia has been asking to get baptised. Chris and I keep putting it off because we want to make sure she completely understands what it means. Last year she didn't necessarily understand that cartoon characters weren't real so we knew she wasn't ready. More and more though we think she really understands and this morning while heading out to the bus she said she was being extra nice to her sisters to show me that she understands that when Jesus is in her heart, she has to show his love to others by being kind and loving. WOW!! She's really been listening and understanding!!!! So exciting! I promised her Chris and I would sit down with her this weekend and really talk about it and make sure she truly understands everything. But what a nice surprise for me this morning!
Posted by Mary at 11:32 AM No comments:

On Friday, the girls decided to have a slumber party with their cousins Kaitlynn & Emma. Not just any slumber party --- but our very FIRST slumber party at our house. So exciting! We headed to Wal-mart in preparation for the big event and loaded up on some junk food. New nail polish and stickers, frozen pizza, ice cream sandwiches, ingredients to make indoor s'mores. YUMMY! The girls arrived at 5pm and we had pizza, did nails, 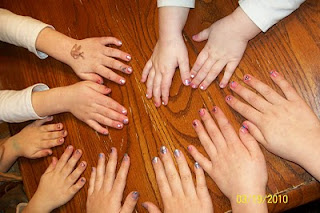 and watched movies with popcorn and s'mores. By 11pm I was ready for bed and the lights went out. This is how the girls first decided to sleep. 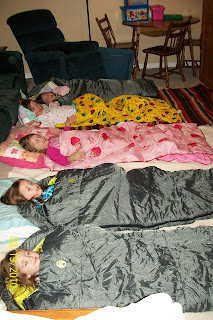 By morning, one was on the couch, one went to her bed, and the other three managed to sleep beside each other on the floor. Probably a minor miracle I'm thinking. By 1pm on Saturday, our entire house was quiet and napping. Not a bad way to spend a Saturday!!
Posted by Mary at 8:04 AM No comments: 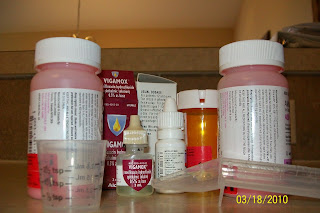 Last week when I looked at the weather for Spring Break it looked perfect. They were predicting sunny, 50's-60's. I had visions of going to the zoo, parks, playing outside and going on walks....picnics. You get the picture. This week hasn't quite turned out as planned. The sun came out each day, but usually not until after 5pm. And, we have spent most of the time at the doctor's office. As of today we have

UGGGGH! Luckily each time we've had someone contagious, we've lucked out and not had to be somewhere so I don't think we've spread any of this junk outside of our house. Crossing my fingers! I've also been trying to convince my doctor's office to give me a frequent visitor punch card. Something like every 10th visit should be free. I know this comes with the territory of having a big family. And I should be glad that nobody is missing school for all of this. But seriously! I'm ready for a break from Spring Break!! 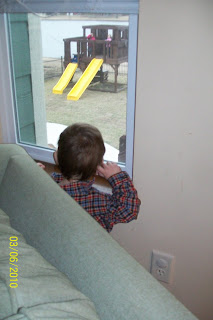 Poor Sam. He's staring out the back window dreaming about being outside with his sisters. If you look closely, they're up in the playhouse. So much fun thanks to Daddy! This spring he's putting on the roof and finishing the sandbox. When Sam's outside, he spends most of his time driving his car on the patio, but I'm sure he'll figure out how to climb up into the playhouse by this summer. Then watch out!
Posted by Mary at 10:27 AM No comments: 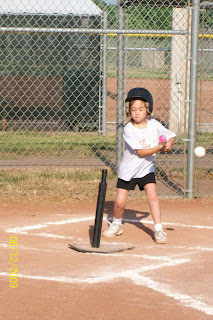 It Spring! Well, almost. It's March at least. And that means its time to sing up for t-ball and softball. I had a minor case of sticker shock when I went to the rec center to sign Sophia up for her first year of coach-pitch softball and Anna up for her first year of t-ball. $96. Yikes! And that's with a $10 discount for the 2nd child. I want my kids to participate in lots of different sports, but wow, when all 4 are old enough, we're in big trouble! I also felt like I was signing away 6 weeks of my summer. The kids will have 2 games each week - so that's 4 games a week sitting in the hot sun watching girls who are cute, but so far have not proven to be stellar athletes. Lucky for me it all ends by the 4th of July when it gets REALLY hot around here. 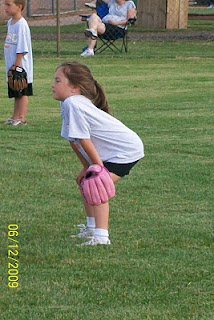 A few days after signing Sophia up for softball we got a call from Coach Spike. Yep, that's his first name! The coaches get to come in and look at all the kids' forms and pick their teams so Coach Spike called and told Chris he had "been scouting Sophia for the last 2 years in t-ball and wanted her on his team." So funny! Chris said, "Obviously you've seen something we haven't!" Chris knows Spike a little from high school so it was pretty funny. He really was just looking for a young team of girls the same age who could play together for a few years. Sophia loved t-ball. She was a great fielder, learned to be a great base runner, but after 2 years still lacked in the hitting department. She got really good at blowing us kisses and spinning with joy when she got to first base! Ahh, girls! Looks like this spring Chris is really going to have to work with her on her batting! Should be fun!
Posted by Mary at 1:34 PM No comments: