What happens between preschool and 3rd grade?

Well, the answer, of course, is a lot.  But I'm thinking more about Thanksgiving and school-sponsored Thanksgiving "feasts."  My preschooler's feast included every child bringing a different vegetable to be added to a stew.  Isabella was thrilled to bring a potato to school.  They also ate the homemade applesauce they helped make.  Sounds pretty good.  And dare I say it?  Healthy.

My third grader's "feast" was a little different.  It was a chex mix feast where all the boys bring something salty and the girls bring something sweet.  "Mom, that means M & M's or chocolate chips!"   Lovely.

Here's hoping your Thanksgiving includes something more than just chex mix!!
Posted by Mary at 12:58 PM No comments:

Today, some of the kids who come to church on Sunday nights sang a song in front of the congregation.  Sam can sing some of the words, do some of the actions, and stand still -- when he chooses.  Today, he did not make that choice.

Instead, as the song began, he chose to turn around, pull his pants down a bit and scratch himself.  It was a fine moment for me as his mom.  I had forgotten my camera and was trying quickly to snap a picture with my phone.  Unfortunately, I took it too quickly and it was blurry.  Before trying a retake, I realized what my lovely son was up to and the camera was put away.  As you can see below (again, apologies for the quality of the picture) Sam chose that moment to partially moon everyone.  Uncle Mark, you'd be proud!  Believe me, the pants went further down.  The thing is, usually when kids sing, someone does something embarassing or funny or both.  I figure with four kids, it's going to be my children  alot of the time.  And he did bring a little laughter and joy to the sactuary, and isn't that a good thing too? 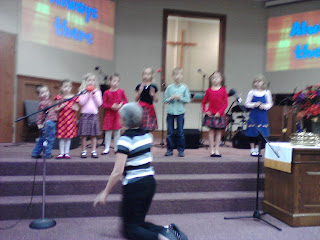 Happy Sunday, from the Moons.
Posted by Mary at 1:56 PM No comments:

Just hanging out at the Moon house... 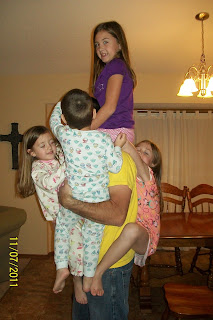 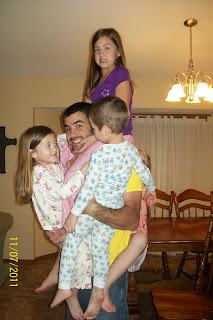 Good times with Dad!
Posted by Mary at 6:40 PM No comments:

On Teaching Children About Jesus...

Last night I sat in our Wednesday night children's class in awe of God.  The fact that he trusts me to teach children about Him is pretty amazing!  Up until now, teaching the school-age children has been about filling a need.  Serving where nobody else would.  I've enjoyed it, but it was always a responsibility.  But last night was different.  It was an honor.

In our Wednesday night class we have several children that come who normally don't attend church on Sunday.  A few of them have never been to church before. We were talking about Daniel and the lion's den.  It's a pretty standard story that most children who attend church have heard many times.  But last night, I saw that it was new to some of the kids.  Completely new.

As we closed out our evening we talked about some of the kids' recent baptisms and why they were baptised.  They knew that they had asked Jesus into their hearts and have a love for Him, but I was trying to explain that being baptised is an outward expression of obedience - showing others about  their decision.  We talked about how Jesus himself was baptised and I just briefly said that Jesus had died on the cross so we could all be forgiven and if we accepted Him we would go to heaven someday.

One of the children said, "Jesus died on a cross?  How?"  Wow!  That blew me away.  This child had never heard that before and I was given the honor to explain that for the first time.  The student wanted to know every detail.  I explained about the nails in His hands, how he hung there.  The child wondered if he had died instantly from the pain or agonized for a long time.  At that moment I was in a unique position to feel completely honored to be able to tell this child about Jesus, and at the same time, scared to death at the responsibility that it involved.  What if I said something wrong, or the way I explained it was confusing?

In the end, it just felt really incredible!  So often in our small church we only teach the "church kids."  The ones who come every week and who know the stories.  It's more about getting them to go deeper, understand better, and apply it to their own lives.  But last night I was teaching to some kids who didn't know the stories, who hadn't heard.  And isn't that what the church is supposed to be about too?  Reaching the ones who don't know about Him.

It's humbling and incredibly awesome at the same time.  And I have a new-found respect for all those Sunday School teachers I had in my life growing up.
Posted by Mary at 8:27 AM 1 comment: 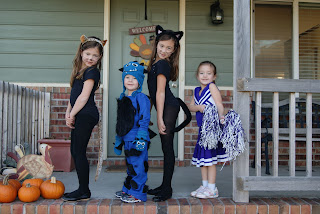 Halloween. It's not my favorite holiday.  I don't hate it, and I'm not morally opposed to it.  It's just that with four kids it:
a) costs a lot  to purchase costumes and
b) brings entirely too much candy into our house.

So, this year I told all the kids they could re-use a costume from previous years or we could make something.

Isabella was perfectly fine being a cheerleader -- a costume we've used several times over the years.  Kudos to her. 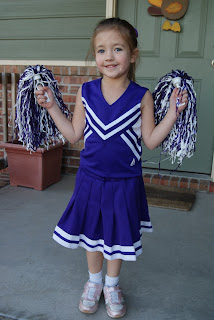 Sam was insistent that he wanted to be a "big, bad, blue, scary monster."  Lovely.  We did find a cute hat and mitten set at Children's Place that was perfect for our scary monster and practical because it could be worn after Halloween.  Next we located a blue sweatsuit (in Isabella's size with pretty flowers on it).  So, I attached black fur to adhesive-backed felt and stuck it on the sweatshirt covering the pretty flowers.  Then I just attached furry spots all over him and spikes on his back.  He was happy.  And, this morning I pulled everything off, washed it and Isabella now has another outfit.  And yes, I do realize how ridiculous he looks.  The thing is - he's 3, so he doesn't know any better! 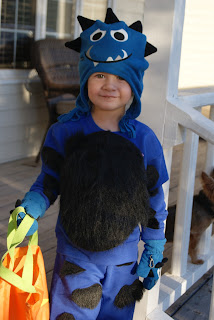 Anna wanted to be a cat.  Easy enough.  Black tights, leotard, a $5 cat ear/tail set, eyeliner for some whiskers and call it good. 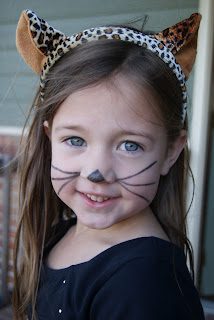 Sophia wanted to be a Dalmatian.  Easy enough.  White sweatsuit at Wal-mart, and black sticky felt.  The idea was going to be to add spots all over, throw some ears on the hoodie, add a tail and a collar and call it good.  Good it was not!  Apparently only the extra-stiff adhesive-backed felt really sticks.  That's what I bought for Sam's costume, but I got Sophia's at another store.  The other stuff comes right off.  At one point, I was either going to have to sew on all the spots, or scrap the whole idea and encourage her to be a cat.  She went as a cat. 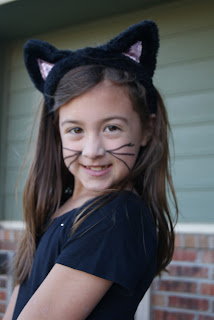 After the kids went to bed I sorted the candy.  Yes, I was a good parent and checked it all over to make sure it was safe.  But then I sorted out all the hard candy and suckers and threw them away.  They take too long to eat and my kids get to sticky in the process.  I sorted out the pretzels and gummy snacks and through them into my snack cupboard.  Thank you to these Moms!!  Then I still had 3 gallon bags of candy.  Yikes!  Every year we let the kids eat a piece at snack time and sometimes a piece for dessert after dinner.  Then some of the chocolate candybars are frozen and pulled out throughout the year.  The other candy goes to Daddy's less fortunate friends who don't get to trick-or-treat.

Finally, a few pictures of visiting Grandad and Grandma.  Yes, once again, Sam was scared of Grandad - but wouldn't you be at 3?  Sophia was upset with me because she wanted to get to their house when it was dark so Grandad could scare her.  But, it was a school night so I got to make the schedule! 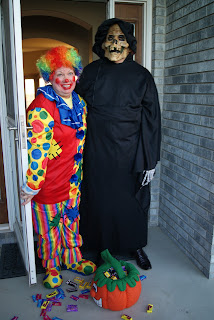 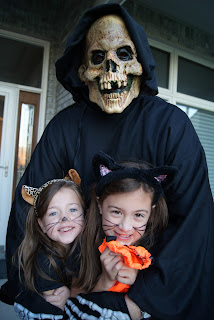 Next year, I'm scrapping my plans of making costumes and just telling them to find something in the dress-up boxes. Easier. Cheaper. And less hassle!  Now, if someone will just convince them of that!
Hope you all had a great Halloween!
Posted by Mary at 5:20 PM 3 comments: