On The Road Again....Another (expensive) adventure in Motherhood

Last weekend we loaded up the kids and headed to Colorado. It wasn't for a vacation, but a funeral for an aunt that died suddenly and entirely too young.  Saturday we attended the funeral and then loaded up the van to head south to Chris' family cabin.  We were emotionally drained and tired from spending a night with 6 people in one hotel room and the day before in the van.  We knew the kids couldn't endure another day of travelling back home.
It was going to be a 2 1/2 hour drive.  We decided not to change all of our clothes before the drive.  We knew snow was coming and wanted to get on the road and to the cabin before dark.  When we got in the car we saw our first snow flakes.  This is how my cuties were dressed!
﻿
And these were my adorable new shoes I was wearing. 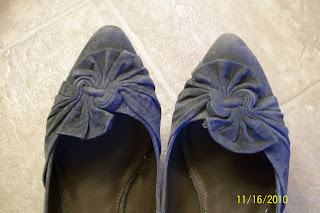 As we headed south and left Denver our "voltage" light came on.  Normally Chris ignores these for a while, but we looked in the owner's manual and it said to get help immediately.  Great.  It was Saturday afternoon.  We started looking for some place to stop and everything was closed.  We finally found a mechanic in Aspen Park that was open.  It was not our battery as we had thought, but our alternator was dying.  Fast.  We started saying some prayers.  As he looked at the car, you could hear it  dying.  He first said he couldn't help us until Sunday night if he could get a part in.  Our alternative was to drive back to Denver and try to find some place that was open.  He said he could charge our battery, but we still might not make it.  Awesome, "have you seen our four children in the back seats?" I wanted to ask.

The mechanic went in to see if he could track down a part and we said a few more prayers. He came out and said we were in luck.  He could get a new alternator, and could work late to help us out.  He told us he could have it ready by 7pm.  Yeah....except that it was 3:45 by then.  He said he could drop us off at a local family restaurant and said they'd "take care of us."

If you know Sam, you know he's a typical two-year-old boy.  Sitting in a restaurant for 30 minutes is a struggle at best.  We had 3 hours and 15 minutes to kill.  And we were not even a little bit hungry.  You know you're not hungry when you completely ignore the free bread they set at your table at an Italian restaurant.  But, we ordered dinner.  Luckily the restaurant had a small basket of toys for the kids to play with and crayons to draw on the paper laid out on the tables.  We ate, we stalled, and then we asked if there was anything within walking distance.  A grocery store.  Well, not my first choice, but I can kill a lot of time wandering around in a grocery store.  We got directions and headed out.  By then it was dark and very cold.  The sidewalks were covered in snow.  Remember what we were wearing and those shoes.... Not ideal for this adventure.

The streets weren't lit well and the sidewalk ended, and really it was much too far for our kids to walk.  We headed back the way we came.  There was a gas station there and I thought maybe they'd have a booth we could sit in.  Nope, closed on Saturday afternoons.  Really?  Our only choice was to head back to the restaurant and hope they'd understand. 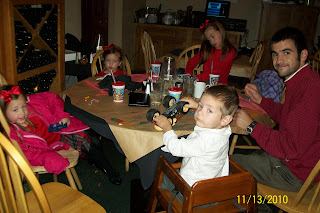 Looks like fun doesn't it?
We had an amazing waitress who was very accommodating especially since the restaurant was filling up with the dinner crowd.  We ordered hot chocolate, we colored, we played with little toys and we waited.  The clock ticked slowly that day.  We were so tired and emotionally drained.  At 7pm, the mechanic came back and picked us up.  We paid for our newly fixed van, checked the weather forecast and finally headed south.
We were exhausted, but we were safe.  If we hadn't found that mechanic exactly when we did we would have been broken down on the side of a mountain road with four kids in the car.  It could have been very bad.  If he wouldn't have been so generous in staying late to help us - it could have been worse.
We said some more prayers of thankfulness.  And we all slept hard that night.  I'll try to share some pictures of the fun we had the next day.  We just love visiting Colorado, but hope we don't have another adventure like this for a while.
Posted by Mary at 1:38 PM